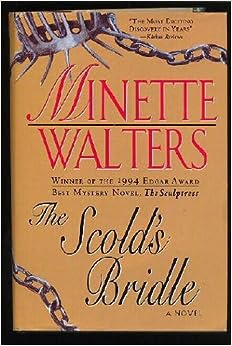 In 20s and 30s, the C series of the novels , confronted with that of today, would win if not blatantly, surely with a difference of points.
However it is also true that sometimes (thank God!) some of the contemporary writers is notable for complexity and freshness of invention.
I recently read a novel by the British writer Minette Walters, I own for many years and that I was never able to read first: The Scold's Bridle, 1994 (Gold Dagger Award 1994).
In it there is the story of a crime and shameful secrets, tortuous and devastating that a woman has noted in her diaries.
Mathilde has a daughter, Joanna,  and a granddaughter, Ruth: together they form a trio of "witches", wicked women, devoted to destruction of the other, but which are beings destroyed in the depths of their souls: Mathilde, beautiful woman and from a family extremely wealthy, the Cavendish (the father, was indeed a member of parliament, but also alcoholic), so exuberant at parties and so desired, in the center of the events of British country in which she lives, in reality she was raped by her uncle ogre, George Cavendish , when she was still a minor, and the shock of this youth violence, perpetrated in the birth of the fruit of violence, it is transmitted to the small Jeanne, daughter unintended, born in the hate and doughter from the hate.
At the time of the birth of Joanna, illegitimate daughter of her uncle, among others, in turn, a victim of his subnormality (he is the product of the crossings as part of a family in which tares have developed exponentially), Mathilde found a person who was agreed to marry her, James, in turn impotent. James figures as the legitimate father of Joanna, but following a family dispute (due to his betrayal), abandons his wife and daughter and moved to Hong Kong. One day reappears and decides (after having had an interview with his ex-wife, due to a certain collection of watches of value inherited from his father, declared stolen by his wife and compensated by insurance, but in fact only set aside) to make tit for tat to Mathilde, who has cheated him: he reveals to the daughter the actual paternity, and as George Cavendish, her actual father and great-uncle,  had broadcast his inheritance, exclusively, instead became property of the  mother. In fact, precisely because of genetic defects of George's father, he had ordered that, his son's death, the property would go to his brother still alive, the second son, the father of Mathilde: this to preserve the property and avoid that excessive generosity of George, due to his subnormality,  finally liquidated it in no time at all.


The conflict between the two personalities from Mathilde and Joanna, never got along, then deepens due to the property that each of the two claims as her own. At two adds Ruth, daughter from Joanna, born in the desperation of a marriage gone bad even before accomplished, daughter of a failed musician, drugged and died from an overdose, he spent all the money earned is not in support of his daughter (to which he wanted very well) but in drugs.
Mathilde is as if he needed to Joanna, but over time he can not stand because without her money Joanna can not carry on in modest: she has become a call girl by high board, prostituting herself in London. On the other hand the same niece Ruth, is remained prey, in her insecurity, of a certain Hughes, a young illiterate but by great charm, who has bent her to his purposes: he is at the head of a gang of youths, younger than him, that he has weaned the rape of young girls even more rich, blackmailed and forced on the basis of threat of rapes, to steal money and valuables from their family homes. It’s also the case of Ruth, raped by Hughes and granted him the pack who raped her in turn for five hours. Ruth has bent to the will of her executioner-rapist-lover, stealing money and valuables from the house by Mathilda. The matriarch, not wanting to leave her estate to her daughter and grandson, because she fears that it could be liquidated in less than no time, resorts to a ruse, imaginative but that will have devastating repercussions on raising of family and on the environment citizen: as she has established a solid friendship with her family doctor, Sarah Blakeney, and also (but you will come to know later) with the husband by Sarah, Jack Blakeney (painter not yet recognized but very talented, so much to be portrayed fully nude, while being older), kicked out of the house for an extramarital relationship, to the doctor she  leaves her entire fortune, wanting in this way to give a jolt to the environment (and to do this, she shall instruct a camera crew to shoot a video with the music of background). Although the video has yet to be completed, someone, seizing the right moment, kills Mathilda: the old woman is found in the bathtub with her wrists cut, and wearing a terrible medieval instrument of coercion, "the bite the shrew ", an iron mask holding a muzzle, a pillory that imprisons the tongue.

However,  thorny twigs too symmetrically arranged inside the mask, so as to torture even more the victim, leads investigators to classify the death, a murder.
Many among those who could benefit from them: the daughter and niece first, but would alibis bombproof (truly removable alibis); Sarah and her husband; James, the first husband by Mathilda; Jane and Paul, friends of Mathilda, who fear she spreads their secrets: Jane was the lover of James, while Paul has fucked Mathilda, and from the relationship was born a creature, which was previously thought to be male, then turns out to be a female. To complicate the plot, there is also the pair of Violet and Duncan, tenants of Mathilda, who live in a wing of Cedar House: Violet has sent letters about the event, while Duncan was definitely another lover of Mathilda.
Obviously, the murderer shall be really the less likely, in a memorable final.
Extraordinary novel by Walters, The Scold's Bridle is a wonderful blend of Mystery and Thriller, which assumes sometimes even the movements of social novel, according to a contemporary narrative that would define Crime Fiction.


The two kinds indicated are plumbed with a deep psychological cut, even merciless, which dissects the story in its innermost recesses, moment by moment. The connotation strong and intensely dramatic, is enriched by ashes hard-boiled, which give verve and rhythm, to a narrative that for a way to analyze the story very closely, could also be slow.
The typical design by Minette Walters, author born in Bishop's Stortford, Hertfordshire in 1949, and English author by successful  (also winner: John Creasey Awarddel Crime Writers' Association for the best first novel, The Ice House, 1992; the Gold Dagger Award in 1994 for The Scold's Bridle own; the MWA Edgar Award and the Macavity Award in 1993 for The Sculptress, and again in 2003 the Gold Dagger for Fox Evil) that is, to describe dramas within broken families , here, better than in any other case, are exploited to perfection, giving us a glimpse of the social community citizen, intimately linked to embezzlement, theft, rapes, incest, betrayal, murder, shameful secrets, blackmail, fraud, including its representatives, all related in one way or another to each other, except at Mathilda, according to a typically British scheme, in which the victim is almost always belonging to the high bourgeoisie unless aristocracy. The ability of Minette Walters to deeply understand the mentality perverse by murderer is not free even to make the potential weakness: the murders are not games of chesses with investigators, as in the classic mystery, but are duels painful  from which no out injured only the killers but also the detectives, all affected in the soul. So the murderer here, is not an evil, but a person who kills because he can only do so, the victim of fate, and also of Mathilda, who is both a victim, because raped in her lost childhood for a childbirth not wanted, and executioner, in her bully all those around her, when not in blackmail others with her memoirs written in the famous Diaries, sought in vain by the police and instead destroyed by the murderer.
Mathilda is the key element of the story and the same narrative structure gives us more figures of detectives who in turn, support the weight of the narrative: Sarah, Sergeant Cooper, Inspector Jones, the faithless husband of Sarah: Jake. Will be he, avenger of Ruth, redeemed husband able to recapture with a tenderness never revealed so thoroughly, his wife, and at the same time able to thoroughly analyze the action coming to reconstruct the figure of the murderer, freeing the action Investigation from the plate. To four investigators who take turns in the story, is adding a fifth figure detective we would like to say, constantly present: is the character  of Mathilda, who, with a different page come from her Diaries, introduces each chapter, and at the same time directs and explains the narrative action and the choices of the other subjects. It’s this a scheme already adopted by other novelists (eg. as in Rim of the Pit, by Hake Talbot).
But there is not only the presence of impersonal and intrusive Mathilda to direct the speech, but also that of a sixth detective, the great playwright William Shakespeare, who  illustrates hand by hand the personalities and situations, with specific references and quotations from his works. The presence of Shakespeare is not random, but even necessary, because just with the figure of a his character, will explain the death of Mathilda, her torture and her relationship with the menage of her surroundings.

The result is a highly evocative writing, full of ideas and cultural destinations, and very flexible in the explanations of disturbed personalities of the characters (all in various ways, victims of circumstance or of themselves), but at the same time, never heavy, and instead extremely multifaceted and rich in rhythm.
Pages that are read with extraordinary pleasure, and that lead to a final no obvious and to a murderer, not fallen from heaven, but instead very true, in his humanity and in his despair.
Wanting to better fathom the narrative material, what emerges is a duplicity of motives, which run within the story on two parallel tracks, and that are crossed by various people. The two tracks, are two temptations always present in the human soul, but that have characterized the last two decades of the twentieth century: money and sex. All the characters more or less, are pervaded by them, but at only one character, the two temptations, bind and fuse each other (although the motive deeper will be the sex): at the soul of the murderer.