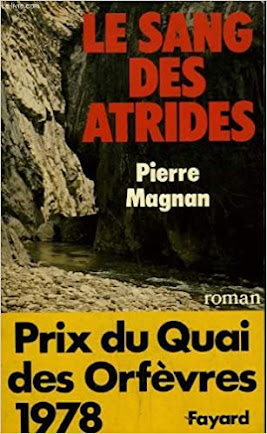 Magnan's true literary career started late, at my age today, 56. Until then he had tried the publication of novels without having great effect, even if he had started with a critical success, The Unusual in 1946. However, the reception of the public had not been equally enthusiastic and the publication of three other novels did not it had had great effects, so much so that for twenty years he hadn't tried to write about it. It was his dismissal from the company in which he had worked for a long time, which gave him in 1976 the reason to try again the book success and this is how Le Sang des Artrides was born with which Pierre Magnan won the Prix du Quai des Orfèvres in 1978. the success was so tangible that Magnan continued to write detective novels, both with police commissioner  Laviolette, who was his main character, and with other characters.

In 1984 his novel La Maison assassinée had an incredible success with audiences and critics (100,000 copies sold).

Before he died in 2012, Magnan wrote his last novel with Laviolette in 2010, Élégie pour Laviolette.

Le Sang des Artrides is an unforgettable novel. For a certain background atmosphere, she reminded me of She died a lady, by Carter Dickson, even if there aren't really impossible crimes here.

Laviolette is an anti-hero, I would say quite the opposite of the character of Van Dine (but with him we will see he has contacts) and yet he has his importance as a detective: he is inconspicuous, short and overweight, with protruding ears, he complains of not being able to run more than 100 meters without wheezing due to too many cigarettes he smokes, but has a glorious past in the Resistance and is endowed with a rare spirit of observation and deduction, which he demonstrates here, together with Judge Chabrand, another uncomfortable character, another anti-hero, called together to manage the investigations for a series of strange murders.

The first to die is a young man of high hopes, Jeannot Vial, son of the upper middle class, of the good salons, who leads a comfortable and carefree life: he is found with the parietal portion of the skull broken through by a blunt instrument. At the foot of the cycling shoes, a disassembled bicycle is found in the car, but not the weapon with which he was killed. While they are trying to figure out, here is the second death: another young man with high hopes, rich, hotel owner, who was participating in the tests for a car rally race: the car crashed into a ravine and caught fire. : Jules Payan's extracted corpse is charred. Very few things have been saved and among these, half-burned gloves, and even here some objects that refer to a bicycle.

Also in this case it is not clear how he could have died, also because there are no traces of braking and any responsibility of other people who did the race, even if hypothesized at first, is then removed, until someone notices here too what remains of the corpse has a large wound on the temple, as in the other case. Only here, blackened by the fire, a large pebble was found: someone threw it .. but how? And where from? The investigations seem to focus on a young man who seems to have quarreled with the victim, but then when the judge must either validate his arrest or release him, Laviolette intervenes and manages to prove the alibi of the victim.

Failure to arrest the young man, protected by a big name in the judiciary, determines the entrusting to Laviolette, who would have avoided him, of the case together with his friend the Judge Jean Paul Chabrand. The move is clever: if the two manage to find the killer .. so much the better, if it does not happen, they will finally have their opponents the opportunity to defenestrate them. Which seems to happen with punctuality when, after an exhausting time in which the two are unable to dig a spider out of the hole, except for a strange sighting in the woods by two hunters, another guy dies: this time it is not from a young wealthy family, but of a shy philosophy professor who teaches in a classical high school: he was found dead, in front of a monument. He got off his bicycle to go to a public urinal, but when he got out, he was shot and killed. Again shot in the head, but this time twice: Cherubin Hospitalier was called. Before he died, however, he had tried to write something in the snow: the letters OR. 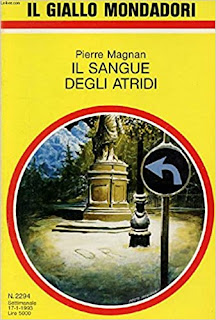 The police, however, found a very clear mark printed in the snow, left by the footprint of an old-style boot. From the study of it we derive an alleged weight and a presumed height, but who could it have been? The unsuccessful investigation causes Laviolette to be ousted after a very rich old woman, who has sent a letter to the murderer, asking to know why she killed her, is killed in her turn. Because she knows him well, she kept him on her lap when he was a child. How did she know? By virtue of binoculars the old lady observed all of her neighbors, and during her observations, she had witnessed some of the murders.

Laviolette understood how the stones were thrown: with a slingshot. Subsequent investigations lead him to hypothesize the death of a judge. The epilogue will be terrible. A double epilogue: Laviolette will save the life of the judge, who should have been the fifth victim, but the assassin will die and after him the real murderer will be found. And it will also explain what Cherubin would have liked to write: Oreste.

Oreste, who? That of the tragedy of the Atrides: Clytemnestra married Agamemnon, who killed him on his return from Troy, helped by his lover Egisto, for having offered him, her daughter Iphigenia, before leaving for Troy, to the goddess Artemis. And after 10 years, Orestes avenges his father by killing his mother.

A story of sadness, of loneliness: a beautiful widow, left alone to look after two children, one of whom is disabled, who found moments of happiness in fleeting sex with strangers who went to buy fashion items in her boutique, which he progressively lost by looking after his children. But someone, observed her, and struck whoever lay with her: in essence it was she who sentenced them to death, welcoming them into her bed.

A very painful ending, full of sadness that will leave a bad taste in Laviolette's mouth.

The novel, imbued with a great melancholy, is full of atmosphere and rich descriptions of the French province.

Laviolette is a police commissioner but here the resemblances to the more famous Maigret end: Laviolette works in Digne, in the small French province, while Maigret in Paris. Maigret almost always conducts investigations with his team, Laviolette relies on his wit, on his spirit of observation: his subordinates have no name, he does not live with them, he only accompanies Chabrand. And for this it is an atypical procedural.

Somehow I would like to say that in some things Magnan looks like a Vandinian epigone: the references are to America (which is sometimes pronounced in the novel), in the fact that the investigator is accompanied by a judge (like Markham), even if here detective is more properly a policeman, like Lieutenant Michael Lord of Daly king or Commissioner Thatcher Colt of Abbot. The element that seems most interesting to me is the identity of the hitman, which recalls another more precisely Queenian novel. And Ellery Queen is also linked to "The Message of the Dying".

However, if it is a mystery, it is one with a very slow pace: it seems rhythmic like a funeral march. And it presents in its course full of pathos and dark drama, a gait reminiscent of a vintage noir. After all, noir has one of the main elements: the femme fatale, Irene, around which the whole story revolves. And then the troubled woman, whom she hates to the death. And the murderer, who kills for love, to avenge the memory of her, essentially adopting a transference: not being able to kill Irene, he kills her lovers, condemning her to a life that is not life, which is like an apparent death. And at the same time he avenges someone. But it is a double revenge: the one of him and that of the one who arms his hand. He takes revenge on Irene, avenging a memory of her; and whoever armed him with hatred takes revenge on Irene because in turn Irene condemned her.

I know it's not easy to understand.

But whoever reads this novel will also understand why this is essentially an unforgettable novel.