Dedicated to Shimada Soji on his birthday, that is today, October 12 2018 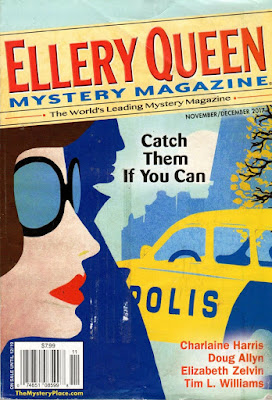 The last November / December 2017 issue of Ellery Queen Mystery Magazine, saw the return together with other authors, of Soji Shimada, the great Japanese writer, author of some of the greatest contemporary tales with impossible crimes and of the amazing novel  The Tokyo Zodiac Murders recently translated and published in Italy from the publishing house Giunti. The story of Shimada, although presented at the end of 2017 in the US, was not a recent work: in fact it was already published in the Japanese edition of EQMM in 1985, as "The Running Corpse". It presents us like the absolute protagonist - in the role of resolver of amazing puzzles - that Kiyoshi Mitarai, an astrologer already met in his most famous adventure, The Tokyo Zodiac Murders (1981).
The facts take place in the apartment of Genji Itoi, owner of the Zig-Zag jazz bar. For a party at his home he invited the narrator and Puff, respectively saxophonist and drummer of a group called The Seven Rings, as well as Asami, a young woman who worked at Zig-Zag, the trade representative Nasami, the critic Onuki, the trumpeter Aka, and the jazz enthusiast Kubo. To catalyze the attention of the group is Namura, the representative of commerce, which proposes a game of prestige: each of the participants in the game will have to provide some valuable objects that he possesses and that has an affective meaning for him, which must be put together each of them must be associated with a number. Then the participants will write on a piece of paper which of the seven objects attracts them most and why and what their maximum concern is; then the sheet will be rolled up, and on the basis of how it will fall towards the numbers, with each launch by each, Namura will reveal what the concern is, without having seen what the actors wrote.The game begins. And timely Namura reveals to Asami shortly after something that concerns her sentimental nature. Everyone is startled, except for Mitarai, the astologist who has refused to give something of himself. Among the objects there is a pearl necklace, of Itoi's wife, and a Cartier watch by Onuki and then rings and another watch. Kubi, a lot of drunk, goes to the bathroom, after having a little funny bickering with Puff, and returns shortly after while the game is unfolding. After a questioning look turned on by those present, some of them, while infuriating a storm of water and wind out, launch the idea of  ​​improvising to play their instruments. There are those who object that you can disturb the other condominiums, but the noise of the storm and wind helps to make the instruments sound less, while the other guests are there to talk or listen.While there is this improvised concert, the power goes off and in the dark, Kubo enters, the guy with the woolen hat, and running, taking advantage of the fact that those present are busy or making music or listening to it, snatchs the pearl necklace and go away. It's dark. There are those who cry out, there are those who would like to shed light. The time for Itoi's wife to get a flashlight and to point it in the apartment, and here is Kubo's own frame while he is taking the door, lighting his shoulders and his hat, before that closes the door behind. A short time later, the time needed for someone to move into the slaughterhouse where the musicians are playing their instruments, and Namura launches in pursuit of Kubo, and behind him Aka and Puff, along the uncovered internal corridor. Up to the railing beyond which Namura sees Kubo disappear by jumping. But to what? Towards where? There is nothing beyond the ringhera. 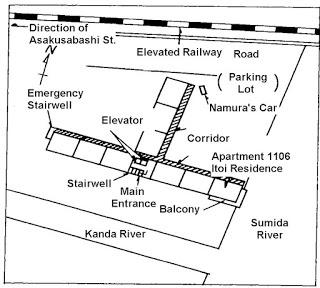 Only the void. From the eleventh floor.After Namura and the other two go up the stairs, being the elevator stopped for the blackout, but when they come down, they do not find anything: Kubo "has vanished into thin air". As they search around the parked cars, they hear a screech of brakes, which is produced by the elevated train.Kubo has disappeared. Literally volatized. How did he do? But even more crazy is the fact when Itoi's wife receives a telephone call: at the Asakusabashi station of the elevated, near their house, they found Kubo's body, smashed by a train: it seems that he committed suicide, throwing himself underneath.Here begin the most bizarre hypothesis to explain how Kubo, jumped from the railing of the internal corridor on the eleventh floor, is found on the rails of the elevated. The last unexpected blow, is when it is known that Kubo was so found under the train, but that before ending up under, he was already dead, having been strangled.How was this possible and who did kill Kubo? Evidently some of the party participants! But how did he do it? He will guess the astrologer Kiyosahi Mitarai, who will propose an imaginative but unassailable explanation identifying the murderer.

We find ourselves in front of one of the most amazing examples of impossible crime that I have read in recent years. As I have said other times in my articles, I think the stories with Locked Rooms or Impossible Crimes better than ever, spectacular, are those not performed by an individual, but by a couple, and those in which there is a sham: in this case, both cases occur. There is the sham, that is, the implementation of the impossibility has been set up previously, and the criminal act provides that two people compete together to implement it. I must say that in our case, identifying the killer is not as difficult as explaining how made Kubo to  disappear. That there are two people acting, is explained by the duplicity of necklaces that disappear: that of pearls, which has served the game of illusionism; and that of jade, which was found in Kubo's pockets. But explaining how the body winded up on the elevated is the real game of prestige. Also in this case, it happens that the maximum impossibility, that is the disappearance of the body, occurs without the killer himself foreseeing it: here the case plays its part, and distorts the assassination's plans. 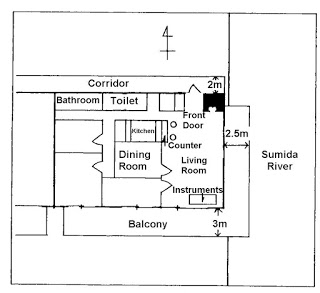 Because it is clear that if the body didn't wind up  where it was found, but it had truely fallen from the eleventh floor, shattering on the pavement of the street below, no one and although less Kiyoshi Mitarai, could have imagined the use of a rope: clue to my readers, which then is a clue left by Shimada to his, that is to me too.

The clue is contained in the first seedling. I ask a question. Why is the width of the balcony indicated? What shape does the balcony have? Shimada here pays a heavy tribute, it seems to me, to many authors of the past. First, wearing a garment in order to make it look like someone else reminded me immediately a famous story by Christianna Brand, in which there is also a sham, The Gemminy Cricket Case. Then it seems to me that Shimada looks at Poe: The pit and the pendulum . It seems clear to me. Ah, yes, I did not say one thing: the reason for the sham, which connects to a pendulum. Which it didn't have to  hide a murder, but a theft. And then ... Then there is the homage to Ellery Queen that is very clear.
First of all the symbology: the number seven here has its importance. Seven is the number associated with the pearl necklace, seven are the rings of the jazz group of Puff and the narrator, seven are the minutes in which once Aka had reached a train running like a crazy, Asami had chosen the number seven for his revelation during the game of prestige.Then there is the Challenge to the reader, with which Soji throws his challenge to his readers:
"For those of you who are new readers following challenge: You now have all the information you need to solve the mystery of the Running Corpse. Good luck! Sōji Shimada".
And finally there is the message of the dying person, or rather the messages of the dead. A murderer pursued by destiny, by fate: he did not want to kill. The assassination took place after a violent struggle, a quarrel: we would say, unpremeditated homicide. Then the creator of a theft, becomes a murderer, gets rid of the body of his accomplice, not knowing that he had stolen a jade necklace from the landlady. And thus, by disappearing two necklaces, not one, one understands that the story is more complex than it should appear. Here the supernatural appears with some strange coincidences that connect with the number seven. Why ultimately the number seven? Because it is as if someone had wanted to accuse the killer, with a numerical symbolism that would lead directly to the murderer. Because here the number seven is the killer. Why ? Read the story and you will know it !

P.S. The maps in the story are actually not two but three: obviously I did not put the third, because into it is included the solution.