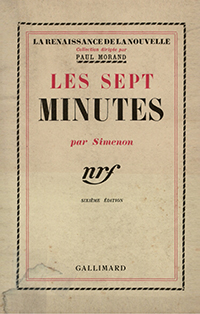 For me last December 23rd was an important day, because I met a friend again that I thought was lost. I didn’t heard Igor Longo for 9 years. I will not be here to say the causes, and what happened to him.


A few days he mentioned some stories that Simenon wrote at the end of the twenties, stories not with Maigret, but with other investigators and based exclusively on riddles: I told him about a volume of the italian publishing house Adelphi, where they were proposed three stories. At first I thought they belonged to one of the two collections,  and then he replied that it would be smarter to buy them in French. My surprise was total when instead I discovered that the volume did not present a selection from Les treize mystères (1929, 13 stories) or from Les treize énigmes (1929, 13 stories), but it was the Italian translation of Les sept minutes or G. 7 (1938, 3 stories): “Three investigations by Inspector G.7 (Adelphi, 2015)”. I bought it without asking what it was, and I did well, because Igor told me that they are magnificent, especially the second of the three, the one that gives the title to the volume: La nuit des sept minutes (1931).
In essence, a preamble speaks about the Inspector G.7, named so because in the introduction, introduces himself to the narrator, who will become his friend and mentor, as a passenger in a red car, of the Parisian taxi company G.7 . The introduction serves and acts as a glue between the three stories that make up the mini-anthology and explains the relationship between the narrator and the Inspector and because he is called G.7. Two short novels are the wings of the most famous story, which lends its title to the collection: L'énigme de la Marie-Galante, Le Grand Langoustier and La nuit des sept minutes.
La nuit des sept minutes is a locked room. A letter informs the police that such a Ivan Nikolaevic Morozov will be assassinated on June 19 in his own house.
The police, in the person of Inspector G.7, looks for news about this candidate at the morgue, but there is nothing from the judicial register or from other sources: you can only go back to his house, Seine Embankment 11, and to the fact that he has a beautiful daughter, who works in the field of fashion.
In the evening of the hypothetical killing, the walking corpse is guarded by dinner in an Italian bistro until he enters his house, a house previously searched and declared empty: they observe the movements in the room, when he arrives, undresses,wears pajamas, and goes to sleep.
The wait is unnerving. The narrator, the agent Aubier, and the Inspector G.7 mount the guard in front of the house: the narrator can testify that he was always attentive, except in a period of only seven minutes during which he is dozing. This fateful seven-minute interval will be fatal, because it seems that precisely during it, Morozov was murdered, accident they discover later. The emblematic thing is that the house is closed from the inside, out on the damp earth there are only the imprints of the three and Morozov, the victim presents a bullet hole at the heart, but no gun was found on the scene of the crime.
It is obvious that we are talking about murder but since there are no progress, because no one is found in the same house, G.7 loses the case. The same friend of his, reasoning on the fact that the actors beyond the victim are himself (but there’s not doubt about his own mental health), Aubier who has been commanded to plunder but that has no connection with the situation in question, and G. 7 (to which he confiscates the confession that he knew Morozov's daughter from before he knew of his death) inevitably begins to doubt his friend, so much to turn to a private detective to supervise him. He already knew that Morozov, a general of the Russian imperial army, who fled to Paris, squandered his enormous patrimony, and that some time ago he had insured 200,000 francs. But then he also comes to know that G.7 is in love with the girl, reciprocated, and therefore is involved in the affair. However, after a somewhat embarrassing explanation with his friend, G.7 will explain the solution to the matter.
Nice story, easy easy. Full of inventiveness, it certainly shows the legacy from Gaston Leroux (the policemen outside the house in which the story is consummated, it is an all-French feature that brings us back to the memory " Le mystère de la chambre jaune " by Leroux, which will then be repeated in other French writers: Le Piège aux diamants and  La Bête hurlanteby Noel Vindry and much later, Le onzième petit nègre by Jacquemard & Senecal) but above all from S.S. Van Dine. First of all it is respectful of its rules, but then directly applies some characteristics to the story: the writer is a friend of the detective and takes the background of the action (even if he enters the story by committing a policeman to a private detective), the disappearance of the gun is connected to a famous novel of the Vandinian trilogy par excellence, as it is replicated exactly the Vandinian stratagem (applied also after the novel by Alexis Gensoul, Gribouille est mort). 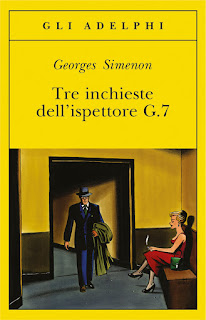 The only defaillance is given by the smallness of the actors of the drama, another feature that brings us back to the French environment (many novels by Pierre Boileau have for example a few suspects so ultimately finding the killer is not difficult) so soon it is clear who could have killed the general. To explain the impossibility of the locked room there is no reference to tricks concerning the closure of the door or the footprints, but to psychological causes, which legitimize the use of a type of explanation for absurdity, whose tangible proof is acquired not by G.7 but by the narrator himself, in his disbelief.