Charles Daly King : The Episode of the Vanishing Harp, 1935 (from "The Curious Mr Tarrant") 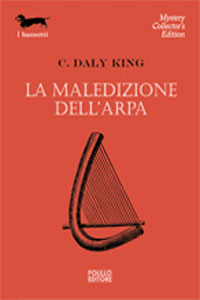 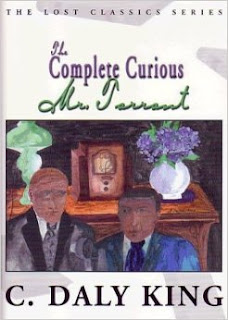 The action assimilates the story to the genre of Locked Room. But is not the Locked Room that we find in most of the production, that is, where in a locked room or in a designated area (American purists oppose this second chance talking about the Impossible Crime: snow, sand, dust, island in the sea open) it occurs a crime, but it is only the disappearance of something that is technically impossible that disappears (and reappears in this case to disappear again) from a closed space without someone noticing. Carr resorted in the last works with Merrivale (The Cavalier's Cup, for example.) And in some stories or radio plays: eg. one in which a person is stabbed to death in a pool, using a dagger that vanishes, like invisible seems that it was the murderer (The Dragon in the Pool, 1944). Other authors have examined this possibility too: eg. the impossible disappearance of a sword, at The Bishop's Sword by Norman Berrow. In some ways, the disappearance of the harp, the resurgence and the new disappearance, are very similar to the dagger that has missed from a room without a trace: it is clear that it is not out, to be there. But where? The King’s skill is there, rather than in discovering of the culprit that is simpler. Moreover, there is a recognizable figure that likens the story to his own creator: the motive is to be found in a distorted personality, whose affection is explained as a psychiatric condition. In this figure, we find further closeness of the copy as its archetype, which is Van Dine: beyond the obvious characterization of private investigator who knows everything (Mr Tarrant is very close to Philo Vance), and the presence of the narrator friend who narrates in first person but always remains in the shadows, further evidence that Daly King was a vandinian writer, in this story, is given by the killer's personality (because they did not hesitate to kill Tarrant) of which the investigator finds a clue by reading a book, just like at The Greene Murder Case: there reading Handbuch für Untersuchungsrichter Gross, here Emotions of Normal People, by A.M. Marston.