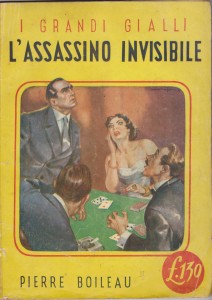 Doing so, Boileau manages to keep the tension very high, and if so far the reader has had a few suspicions and then essentially was taken to concentrate his attention on very few, because two, Alex and Monique are kept out from their own investigations because they played, together to Brunel and Pierre,  bridge (a game that often appears in the novels of the time, by De Angelis to Agatha Christie, Dorothy Sayers to Stanislas-André Steeman), precisely during the solution, in which the suspence should cathartically fall, in this by Boileau, instead, it increases spasmodically because in a totally unexpected final, happens everything and its opposite. And everything is explained, as a murderer and a thief, different people, can vanish in an enclosed area without being detected, and as a murder in which there can not be an accomplice, he lacks; and finally as Simon, although not  murderer, let alone the killer's accomplice in the murder of Alex, he is in a sense an accomplice of another murderer, that of the old woman, although he can not in any way be involved in the murder of her.
Extraordinary!
Boileau really he is, because, and this is the biggest surprise, far from creating a novel based exclusively on clues, just in solution reveals a mechanism very cerebral, with a very pronounced psychological aspect, which concerns the way of shuffling the cards and turn the reader's attention, creating the conditions because, on the basis of acts very obvious, he is led to believe one thing instead of think of another. To give a measure of the mechanism of the highest stylistic virtuosity, I emphasize two particular moments which for me are the measure of true creativity and power of reasoning by Boileau: the closing the front door, and the volatilization of the thief after Simon knocked three times on the door of the room where is the corpse by Mrs. Apolline,  watched over by Pierre. It is the mechanism of sound illusion, explained in a famous story by Clayton Rawson, From Another World, about which I wrote an article that I have not yet translated into English, in which I wrote that for the first time I had read about a sound illusion, and this had left me speechless. I was wrong. I thought that this was the first time that had been used such an illusion, and instead already three years before a French had used it: Pierre Boileau.
This novel reveals a pattern common with another novel, Six Crimes Sans Assassin, for the way in which the murderer leaves the scene. In this, and we also noticed in the case of La Promenade de minuit and Six Crimes Sans Assassin, Pierre Boileau tends to reuse in later novels, gimmicks and escamotages that he has already used his other previous.