Agatha Christie: The Murder On The Links, 1923 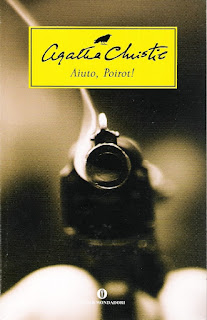 Agatha Christie wrote The Murder On The Links in 1923.It is the second novel in the series Poirot, after The Mysterious Affair at Styles, the onset of 1920 at which appeared Poirot, and the third in general, because a year earlier, in 1922, was released The Secret Adversary,at which appeared the couple Tommy & Tuppence.
It is one of the novels that I liked most, of the many written by Agatha Christie. One reason: the text is a fresh, crisp, full of pitfalls, of false leads, clues true and false clues, and with a final fireworks display. Also is the novel in which the tender Captain Hasting falls in love with the beautiful Cerentola, and then to each other "yellow" mixes also a rose: in this way, the Christie laid the premises for some novel further, the friend of Poirot emigrated to Argentina, along with his better half, leaving Hercule alone to face from time to time the bad guys that the case puts in front. What do you want: more years pass, I become more romantic!
Poirot received a letter from a certain Mr. Renaud, a resident in France, who implores him to go to his aid for an imminent danger: for this he hires him, promising him a cachet that Poirot himself will have to set: therefore a subject has great economic possibilities. Poirot and Hastings embark, but when they get home to him, they find out that on the night he was murdered.
The wife is the only heir of the Renaud’s - because he, after a furious argument with his son Jack, disinherited him - was found tied so tightly that the strings have plagued meat. Moreover, at the sight of the corpse of Renaud, stabbed in the back with a dagger, memory of war, made by his son Jack, his wife faints. Poirot is convinced that she can not have killed her husband, who was found face down, donning a coat too long for him, where they find a compromising letter with a certain Belle, with below the underwear, lying on the ground, in a pit dug for him, on a golf course. The wife said during that night she was taken by force by two bearded men, by olive complexion, coming from South America (Santiago, Chile, because there Renaud had been in the past), who spoke about a secret that he would have to reveal; that all occurred at two o’ clock, and that her husband was forced, after wearing an overcoat, to walk away with them to a destination not too far away. It is found a clock with broken glass, but working indicating two o’clock. Giraud, a French policeman, opposite to Poirot for ideas (immanence opposed to transcendence, the mere hint material as opposed to psychological analysis) finds also a match and a cigarette butt, a long hair (woman or man). The two are as opposed from beliefs different as from mutual dislike.
Meanwhile, Capt. Hastings has made the acquaintance of Cinderella, a variety starlet that performs with her sister. At her request, he brings her to see the body (tells him to be a freelance journalist) and the dagger that was extracted, she faints, he carries her out, leaving ajar the door of the shed where the body is still preserved, and someone else steals the dagger. Consequence? Another is found murdered, in another shed nearby. 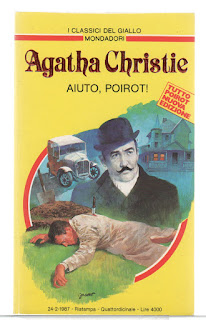 Dresses well but his hands testify that it was someone who did manual labor. No one recognizes him. It would appear that he had been killed with the same dagger, or else the same, but then it turns out that even he was dead before was killed Renaud, and who was stabbed after he was already dead for a seizure. Why?
To all the slaughter of false evidence, true, corpses galore, it is to add a story between Renaud and Mrs. Daubreuil who lives with his daughter Martha, in love with Jack Renaud, in a nearby villa: the wife of Renaud adds that they had a history together, but does not say that, instead, it was blackmail. It learns from the Secretary of Renaud, Stonor, speaking about large sums paid by Renaud to Daubreuil. Why? Who is George Conneau, tied to Mrs. Daubreuil, from a previous famous case of murder, a fugitive for a long time?
Poirot will come to the solution, not before two alleged killers, innocent, has been declared and they have declared themselves guilty (without being this), especially the second, to allow Poirot to frame the real murderer who after killing Renaud tried to kill even his wife.

Novel truly magnificent, with a young Poirot, especially in full mental health (to be enjoyed, his ruminations on his famous "gray cells"), is a constant whirlwind of situations some almost to the limit of the paradoxical, if not grotesque, while being dramatic. You don’t understand how Agatha Christie has given so rein to her imagination, inventing a plot so tangled yet so straightforward: there are two false solutions, obviously indicating two false killers, before the real, in which also enters Cinderella, or not Cinderella, but almost; real clues (those located by Poirot: a piece of pipe, the dirty rags); strange behaviors: why does Poirot  measure the length of the coat that Renaud wore when was stabbed ? false leads (those located by Giraud) and the broken clock, in addition to the dagger: there is one really? Or more than one? And why did Jack say the false swearing that during the night of the assassination of his father, he was away from home, while it was not true?
The set of situations and behaviors we rushed back through the years: there are the alleged criminals, with fake beards, who come from a country far away, where the victim had worked and where he met a "secret"; a famous process that emerges from the past; a strange double murder; a romance and gallantry of the past. There is still a freshness and ingenuity that the '30s will wipe out,  with their hypercomplex plots. 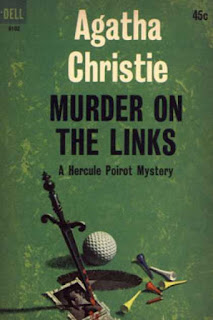 It’s clear that the careful reader will find strange references, in this Agatha Christie unripe: the victim that recalls a distant land, a secret, an alleged assassination linked to that, of the criminals with fake beards, are all factors that call immediately to mind The Valley of Fear by Conan Doyle (1916), one of the four novels with Sherlock Holmes. But there is not only this. No, there is also the other. Who or what, does draw the twice investigator, the challenge between a serious (Poirot) and a ridiculous (Giraud), each committed to take in the other chestnut? I drew immediately Maurice Leblanc, and situations from feuelliton and recall specific to a compilation of two stories, by the French writer: Arsène Lupin contre Herlock Sholmes, where the French champion, gentleman-thief lent to the detection (Arsene Lupin) is opposed to a farcical and ridiculous English detective, Herlock Sholmes, bad copy of the most famous Sherlock Holmes .. The challenge between the cousins ​​across the Channel, which had been marked by Leblanc, stating the French intelligence on stolidity English, here is turned with a challenge not between English and French cousins ​​, but between French and Belgian cousins, where the Belgian is both personification of the English spirit.
That Christie could know the work seems plausible to me, given that the two writings Leblanc are ascribed to the years 1906-1907 and the volume was published in 1908. For the rest, here as well as in the original French, we have situations of hilarity spread: the French policeman, who searchs  for clues like a bloodhound, complete with a magnifying glass, hands and knees on the floor, is opposed to the former policeman Belgian Hercule Poirot (but living in England), who discovers the clue fragment check, just because obsessed to put order where there it is not: and so under a carpet badly put, he finds the clue, escaped the most. This discovery is not a coincidence, but is the product of the method by Poirot, according to which "the order arises from confusion" : as it is necessary for in the study by Renaud the carpet is smoothed roughly and his flap is put back in place, because is inconceivable to Poirot that something is in disorder, so it is necessary that in the context of the problem all the tiles fall into place naturally, without forcing. And then, when there is something in the order of his gray cells can not be explained, it can not be guessed even if it appeared to be that at first sight.


Poirot opposes to mere material evidence, the acute psychology of his gray cells. The false clue from broken clock is a masterpiece, but it is even more the clue coat: his explanation is pure class. Not to mention the dagger, or rather of the two daggers: yes, this is the icing on the cake. The second body, which is stabbed by the same dagger found on the first victim, you know he was already dead when was found Renaud: so how did the same dagger to be in body of a man stabbed before? It’s clear that there should be two daggers! But then the other will happen again and you will find that the daggers were actually ...
For the rest, bad women opposed to good and defenseless women, and a chaperone as Hastings, ready to throw everything to the winds for the beautiful Cinderella, in one of the most compelling novels of the first period of Agatha Christie.