Paul Doherty is one of the most important and known  writers of historical mysteries today.
Born in 1946 at Middlesbrough , father of seven sons, catholic, he is "Headmaster to Trinity Catholic High School, Woodford Green, Essex.  The school has been described as one of the leading comprehensives in the U.K. and has been awarded “Outstanding” in four consecutive OFSTED inspections. Doherty "after A-levels, he went to Ushaw College in Durham for three years to study for the Catholic priesthood. In 1967, he was admitted to Liverpool University where he gained a First Class Honours Degree in History and won a state scholarship to Exeter College, Oxford" ( notices from http://www.paulcdoherty.com ).
In 2011 he was awarded an OBE.
Today we will analyze a novel from series of Brother Athelstan: Murder Most Holy , 1992 (the novel was firmed as Paul Harding). 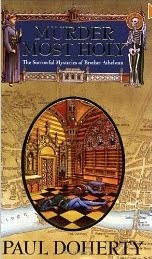 In the convent of Blackfriars happen obscure machinations; it is developing a Chapter Inside the Dominican Order to discuss the matter concerning the theological statements of Henry of Winchester, but while the two inquisitors viewing the cards to give an answer on the fact that they contain or not heresy, Bruno and Alcuin two brothers are brutally murdered.
Athelstan is convened to “Internal Chapter” by the Prior of the Monastery, Father Alselm, to investigate the death of Bruno and the disappearance of Alcuin, who has not been seen out of the church, but he could do it, only that all of his personal effects were in his cell. Athelstan doesn’t wish to be caught in the quarrels and intrigues in the interior of the Dominicans, which is in effect a black sheep, as a novice he escaped with his younger brother to fight in France, only to feel responsible for his death on the battlefield , and for the heartbreak of his parents: for this he was sent for punishment to manage an ailing parish of miserable people, only to become attached to his parishioners, including a hunter of mice, a swineherd, one soldering, a prostitute, a rich widow, a painter, a dreamer, forming the parish Council. But he must do it. He Would not want because there are two other problems that see him as the protagonist.
The first concerns Sir John Cranston, coroner of the City of London, appointed by His Excellency John of Gaunt, fourth son of Edward III and uncle and protector of the young Richard II: Sir John has fallen into the trap set by the protector of the sovereign, who wants Sir John more attached to him, and not rather too independent as it is currently.

Umberto Eco is a sign that for Doherty must have had a weight and a very broad resonance everywhere, even in England, probably also thanks to the film by Jean-Jacques Annaud and the interpretation by Sean Connery.