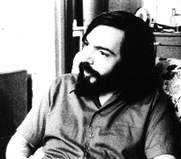 When John Sladek wrote Black Aura was 1974: up until then he had written only  science fiction novels .
The " conversion" to the Genre Mystery ,  it had occurred two years before, when The Times had announced a competition for the best unpublished mystery story , “The Times Detective Story Competition” - and bear witness to the high quality of selection conversely would have guaranteed the high quality of work winner , there was also the presence of Agatha Christie among the jurors:  He was awarded winner, with a flattering opinion by A.Christie .
The story was called By an Unknown Hand (in Italy it  is still unpublished): a locked room of extraordinary level, as the best by Carr or by Rawson. Sladek had a feature (he died 12 years ago of pulmonary fibrosis) , typical of science fiction novelists : his novels had some fantastic plots , verging on the bizarre and on the visionary ( like some by Fredric Brown ).
The plot and the staging of the impossible crime is one of the most exciting in the flow of crime fiction in general, and more specifically of the locked rooms, I 've ever read. Because, even if the substance would be impossible (the subject enters into a hotel room, and then when you enter into, he is strangled to death . And there was only the detective to guard the front door and he swears that no one came out of it. But someone has murdered a man , in a room from which no one left or entered from the outside) , but the solution is reduced to an orange chair and to an old trick as the world . The detective , Thackeray Phin , with the help of readings by Carr and by Chesterton,  finds the key to the problem and reveals very ingenious premeditated murder, by virtue of an unprecedented imaginative virtuosity (except Fell, Merrivale , Bencolin , Don Diavolo , Merlini , and a few others ) .
I mentioned the story, because Black Aura, the first between two novels , takes up a lot from the story : the first, Sladek entrusts the investigator part just to Phin , and he prepares an ingenious  plot.. Then , he disseminates a series of impossibilities  really impossible. In essence, what we can say to introduce the novel is that Sladek was an author so intelligent than a simple and straightforward reading is never enough to understand the mechanisms that conceal the plot : you often resume reading and go to re-read what you just read, to have a mindset and to be able to follow the author and his detective, in the labyrinths of the plot.
Black Aura is so. The birth of a visionary fantasy . But at the same time it is a clear-cut answer to own convictions . Sladek was a positivist and as such, a materialist subject : everything did not fall within the scope of demonstrable , it was discarded. For example the occultism . His intellectual conception , had already been released in his sci-fi works in the form of irreverent and sarcastic judgments .
Phin works within a community of spiritualists , conducted by a medium that prides to get in touch with many otherworldly entities , and so doing seems she ensnared some of her members; and he suspects that in this community there is not just plagiarism or circumvention of the weak and incompetent persons, but also real crimes . Therefore, he who does not believe to mediums and seances, pretends to want  join , although some of the followers of this cult know very well he is a detective.
To heterogeneous group , a company of the ethereal Mandala, part several persons: there is a reverend, a psychologist, a retired military officer , a pop singer , and, of course, the medium, and a scientific researcher . Everyone is there for a purpose : there’s who exploits the gullibility of others, who in order to avoid any interference of entities that are not beneficial, who really gets in touch with the ghosts by his dead . It’s the case of Lauderdale , who lost his son Dave . It is said that his ghost has appeared to the pop singer . Dave was a drug addict , who had come into possession of an authentic Egyptian talisman , which is said to bring bad luck, a cursed talisman in the form of a beetle .
He died for a drug overdose: this is the verdict by the police. But some is not convinced . The fact is that Phin begins to investigate . He knows nothing about Dave, but he wants go to the bottom of things and he starts asking questions . At one day , Lauderdale, in front of everyone , including Phin, goes to the bathroom : Steve Sonday , the pop singer and his friend , is out.  Some time elapses, but he does not come out . Eventually they decide to go to see if he felt bad, but they found the empty room, without he has been able to get out without the others could not see : vanished into thin air. Phin is the most worried . And while others persons are scrambling to look in all the corners of the building , he is increasingly concerned , as the time passes and Sonday is not found : did Sonday dead? This fact becomes apparent when they found him in the shed , in a kind of vertical caisson , sitting and strangled .
Is not the only disturbing thing, though. Some time later, just Steve Sonday , the friend of Lauderdale, organizes an experiment in which he can prove to the group, even disbelief , that he can levitate in the air, in front of their eyes , to the height of the balcony. Too bad! He precipitates and he remains stuck in the gate . In short, too many criminal events . To which again it is associated the attempted poisoning of the medium, and the extraordinary disappearance of Reverend: he comes to pray in the mortuary chapel of the funeral company , although there are no other means by which he can come out, if not precisely the coffin, he mysteriously disappears , he vanishes into thin air , only to be found elsewhere, in a state of unconsciousness.
To Phin will be hard to find the key to the problem , and nailing a slippery and unpredictable murderer.
Again Sladek demonstrates a capacity to surprise, playing with the readers: by directing them in one direction and then making fun of them with pure conjuring tricks : for example, the disappearance of the reverend. How did he vanish into the chapel ? The two doors were guarded : the first  by  two pallbearers , the second by the other persons of the Company spiritualistic: someone obviously is not telling the truth. Or .. is it possible that the coffin might contain two bodies. The reality will be less gruesome than you might think, but the  possibility that in the coffin there could be two bodies, it drews The Greek Coffin Mystery by Ellery Queen ( and I'm sure that this remembrance Sladek  had in mind when he designed the situation ) .
The levitation that is an optical trick : which writer does it bring to our mind who put a famous optical trick at his very famous novel? J.D.Carr , at The Hollow Man, but also at a short story with Colonel March: The New Invisible Man .
The trick of the bathroom is a variation of a locked room he designed in the case of Invisible Green: in the first novel, Sladek devised a locked Room, making finding the victim locked in the bathroom; here, he invented a disappearance from a closed bathroom.
But the best thing about the novel is the literary quality , the suspended tone between the satirical and the ironic , with some good joke;  the rhythm is smooth and the style is flowing , very light. The inventions are wasted , and so the tension remains very high until the end .
But like any good final, at the manner by Fredric Brown, Sladek is astonishing : where Mrs. Webb was defended from the charge of stealing the ring from a dead , citing the fact that a martian entity Martian had given her it  , Phin fixes a spaceship : it will not be true that the Martians really exist ? , is as Sladek wants tell us .
Talking between us, if we must say, the two disappearances from the bathroom and from the chapel they are not much, because the astute reader directs his gaze in the right direction: it is the levitation levitation the real trick who leaves us completely astonished .
Then when he will explain the trick, someone will can say, of course, could not be otherwise.
Strange nobody has thought before, though.