Today I will discuss a novel by Ngaio Marsh, an outstanding essay writing and genius.
A Man Lay Died, is her first work. It was published in 1934.
It 'a jumble of ideas, each in itself interesting: ancient weapons and bloody, secret societies, three Russians who plot and a crime inexplicable. Ideas that strangely created confusion but instead are blended beautifully. The fact is however that in this case we are dealing with one of the major writers of the 900 is not only famous for his crime novels but also for his work in theater. In fact, I can say, without fear of being contradicted, that this his first novel, a play that is both a detective novel: it has such a high level of performance and representation, to be left stunned. And there is such a level of orchestration, with attention to detail, do not leave disappointed.
Sir Hubert Handesley is famous for his festivals, unforgettable. He called this time his niece Angela North; Charles Rankin a man old 46-47 years,  inveterate Playboy; Nigel Bathgate, cousin of Rankin and gossip reporter; Rosamund Grant, a great beautiful woman; and finally Arthur Wilde archaeologist, and his wife Marjorie. The aim of the festival is to organize a Cluedo Party. We must first choose a murderer, who will choose the victim. Once communicated his decision, the victim will have to play dead and the others will - within a time limit - discover the murderer.
The fact is that not everything goes as it should: in other words, after the murderer hit, the dead remains .. really dead! Charles Rankin, who had made ​​the mistake of trying at all costs to make themselves obnoxious (mocking Arthur Wilde in public, literally putting it in his underwear; teasing the two women Marjorie and Rosamund, both in love with him, and one of them, Marjorie faithless, having an extramarital relationship with him; antagonizing Dr. Tokareff, physician russian, part of a secret society, due to an ancient mongolian dagger, which now owns Rankin but that first belonged to the secret society of which Tokareff is one of the affiliates, and on top of that he had promised, in case of death: £ 3000 to Arthur Wilde and the dagger to  Sir Hubert Handesley, well-known collector of antique weapons), now lies on the ground, with his mongolian dagger frame in the back, at an angle so the same heart remained transfixed. Soon, the Inspector Roderick Alleyn , scion of an aristocratic family , who works in the police more to satisfy his passion than for nothing else , enters at the scene , faced with a seemingly insoluble problem : all persons are protected from accusations , since each of them is protected by the statements of at least one of the other guests, if not by the personal servitude. Someone has to have killed Charles Rankin ! Yet from the evidence , all the authors of the play would be impossible to have committed the murder : someone was in the bathtub , another sang loudly on the other side of the house, who had been seen elsewhere servitude . The only person who seems to be more at risk is Rosamund , whose alibi was contradicted by a waitress.
Meanwhile, however, can be seen , along with the central subplot , other minor subplots : the secret society ; the ancient and cursed dagger, the escape of the butler , Vassily , who was also Russian; the seemingly disconnected death of a Polish in Soho . Then come some evidence : a glove burned in the fireplace, the fluff of a black fur attached to a gate of the courtyard , a mysterious letter .
And the central story is linked to a plot of a secret society , torture , investigations rather than by Alleyn , for whom is reserved the role of " deus ex machina " , by the same Nigel in love ( requited love ) with the beautiful Angela North . It’s  as if the Marsh , here did the dress rehearsal for her unforgotten stories , detective stories that intertwine to sentimental items (the story of Agatha Troy , painter , with Roderick Alleyn , Inspector of Police but also Lord : in fact , in a drama that was built on this story , Angela North who falls in love reciprocated by Nigel Bathgate , was replaced by Agatha Troy , present in most of the other stories by Marsh) .
It may have been Tokareff to assassinate Rankin , to regain possession of the dagger , improperly detained by Rankin ? Or the master of the house to grab a precious object ? Or the same Wilde to get hold of £ 3000 ( but he would need ) ? Or were the two women , Marjorie or Rosamund to kill him in revenge for having been used by him ? Or the same Angela or Nigel , for obscure reasons ?
Someone rang the gong , when the murder was committed : why to draw the attention of those present ? Why did it go off the light? Who could have hit behind Rankin , tall enough to reach the panoply in which it was placed the dagger , to grasp and to hit behind Rankin , who was preparing a cocktail , without him noticing?
And above all, how did he do, taking into account that everyone (except Rosamund , but she is not the murderer ) have an unassailable alibi ? 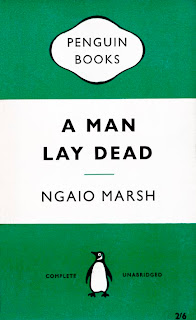