Norman Berrow, an emulator of Carr: The Footprints of Satan, 1950 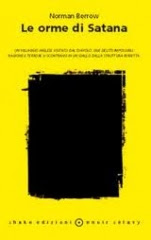 Norman Berrow is a name unknown to most people: from New Zealand, like Ngaio Marsh, but less known to the public of the lovers of the classic mystery, however, he retains his place in literature of the detective genre, having tried to challenge John Dickson Carr: proposing, in his novels, crime impossible and, several times, Locked Rooms.
Although born in England, in Eastbourne, East Sussex, September 1, 1902, from British parents (but his father was born in India), the third of four children, emigrated with his family of origin, then in New Zealand, where studied at the University of Canterbury New Zealand. But beyond the fact that he was married and had lived in Gibraltar for some time, since some of his novels are set there, and had fought in World War II, beyond the picture, which is incorporated, not more is known. What is known is that, in certain environments, Berrow and his novels were very popular: The Bishop's Sword, Ghost House, The Three Tiers of Fantasy, The Footprints of Satan, are some of the most representative stocks of the twenty total that until the year the '50s were published. About his death date, there are important concerns: according to great majority of sources, his date of death is unknown. But from a friend of mine, who was one of the drafters of the Italian edition of the Dictionary Maspléde, I learned long ago that the date of death might be 1986. 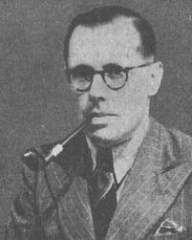 It must be said that The footsteps of Satan is not the first title ever in Berrow to be published in Italy: in fact, in 1958, at “Gialli del Triangolo”, was published by Norman Berrow, “La belva of San Roque” (The Claws of the Cougar), a novel late, having a cut more adventurous than those with closed rooms, but belonging to the years' 50. Currently all the works of Norman Berrow, are available at Ramblehouse.
Norman Berrow tried to emulate Carr, creating a series of situations that often call him back: the disappearance of a road, in The Three Tiers of Fantasy, brings to mind the same disappearance of a street in The Lost Gallows by Carr;  the disappearance of an ancient sword from a sealed casket (The Bishop's sword), may recall the carrian disappearance of a cup from a room (The Cavalier's Cup) and so on.  It’s to say, however, that the inventive step of Berrow can not be said that it was just poor. Several themes found in his works are bizarre: one inch giant who kills (The Spaniard's Thumb), the room singing (The Singing Room), the killing of a demon called "The Black" (Oil Under the Window).
The novel The Footprints of Satan, has the berrowian explanation of an event actually happened in 1855 in some remote places of England, when goats were found footprints imprinted in the snow, and in inaccessible places, such as the steep roofs or above the high boundary walls of the estate. If they occupied the illustrious British newspapers such as "The Times", while noting that timidly position to do so, they admitted the possibility that Beelzebub himself, no one knows why, he wanted to visit the remotest lands on the same night.
Norman Berrow from the historical fact, builts his history: in the town of Winchingham, on the slope of Steeple Thelming, in a winter night, while all the townspeople are there huddled under blankets and warm, are left the unmistakable footprints goat's foot in the snow: that Satan may have decided to take a walk? The fact is that the thing to explain is associated with the discovery of a hanged man. The local community is calling the police to ensure that it is not a joke in bad taste, and the cops say, photographing them, ones are just footprints goat. The strange thing is that the prints that at first seem random set, however, follow an order: it is like a procession. From house to house, the tracks wind their way across the country: here and there disappear, to appear in a few steps away, on roofs and walls (in places inaccessible), until notice footprints are human, followed by goat up the hill, where a clearing desolate, found hanged comes to a dead tree, Mr. Mason, dressed in a double-breasted gray suit with a flashy tie (even here we find carrian references: for example, the man found stabbed dressed in black, with a cylinder, a false beard and a cookbook,  in Arabian Nights Murders).
The hardest thing to explain is that there are around the tree only human fingerprints and those of.. a goat, and no other. To resolve the arcane mystery, is caledl the Inspector Lancelot Carolus Smith, who must struggle between real goat tracks, apparitions of a supernatural being called "Lady Blue", queer characters like Jake Popplewell and his old ass Boomer, Miss Forbes , Greg Cushing (grandson of Jake), Croxley spouses, spouses Maltravers
At one fine day they find Mr. Croxley, who had been away from home telling his wife that he went to the police station, in the middle of a field, killed by a blow of his hoof: even here there are no other footprints that his and those of the goat . Lancelot Carolus Smith already groping in the dark after the first offense and after the discovery of footmarks on the window sill of the house of Mason, the window closed and locked from the inside, now he is in danger of collapsing. Until ... suddenly he sees the light. And he identifies the murderer.
Let's say that the main dowry of this novel is the atmosphere: heavy and looming, gripping the reader, at least until the crafty player and broke every type of solution (the minority) understand what Berrow has hidden, and when he know what, inevitably you understand at which circle is to be found the murderer. What is lacking, however, in my opinion, is the perfect fit between complexity of plot and complexity of the atmosphere: if the atmosphere is very effective, by virtue of a skillful mix of various elements, it does not match up to the end the complexity of the plot. I might add, that the fact that he remakes Carr, also identified another flaw, which is of type character-psychological:  Berrow in my opinion should not be to the end very pleased with himself, literarily speaking, and then always tried to relate to the others, those who had success beyond Carr: as  in the preface Mauro Boncompagni  says... Quentin, Wallace, Oppenheim, Woolrich (and I would add Downing).
The atmosphere by Carr introduces a mystery that is so real, and that unfolds throughout the novel, and that is the answer at the end, and this is because Carr has a relatively large park of characters; Berrow, at least, in novels I've read,  presents less characters. What if on one hand allows him to focus exclusively on the staging of the crime, the other, presenting a small park of suspects , ends up making the reader understand very shrewd (the average beginner and are not at risk), long before what happens in Carr, who may be responsible of murders. This happens because it changes the perspective of the general layout of the staging: Carr looks at 360 °,  Berrow at 180 °. The first writes a story and weaves a novel broad, the second implant a story but even if it is enormously inventive and quality, however, can not or doesn’t  want to manage a large fleet of suspects. And then the novel in my opinion loses in intensity, especially the ending where the reader would expect an exploit and it all ends up instead with a deflation of tension, not with a bang.
Moreover, the character of Norman Berrow, lacks a characteristic way of speaking that identifies him (the blasphemies by Fell or Merrivale, literary allusions refined by Appleby, frequent French expressions by Poirot) and the same name can be anything but a sum of the famous names of other investigators (Lancelot Priestley by John Rhode and Carolus Deene by Leo Bruce).
Beyond this, the novel only for an atmosphere of rare quality, and a surprising explanation of the two impossible crimes (although I guess the murderess). Discovering the motive and the explanation of the locked  room instead are more difficult (here Berrow prevails on reader).