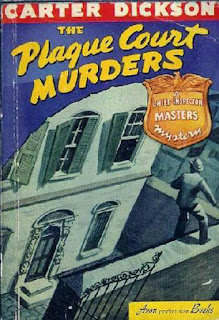 Not everyone knows that The Plague Court Murders, Carter Dickson’s novel (John Dickson Carr) published in 1934, has a pretty revealing subtitle: “A Chief Inspector Masters-Murders”. It means, that Carr at first, probably, had decided to create a series of novels (including the aforementioned novel would have been the first) not based on the character of  Merrivale but on Chief Inspector of the CID, Masters. Besides the fact that in this first novel, Humphrey Masters should have at first a much greater role than that of Henry Merrivale, it also follows from the structure of the novel: it is much more Masters dropped into the mystery, he is interrogate several witnesses including you find the culprit, Merrivale and the same appears on the scene of the crime after at least a good half of the book.

It would suffice, however, only the characterization of the character Merrivale to understand even the most doubtful that, in this first novel in the series, the figures of Merrivale and Fell, morphologically, are not very much different. Carr, the beginning is not that he had already given a well-defined characterization to his character. In contrast to Masters, which is presented to the reader on two separate occasions: the first is when it is presented as a hunter of fake mediums and false occult scholars saying that during the period of spiritualistic mania that had invaded England after the end of the war, he was a sergeant whose main task was to unmask the false medium, and that his interest in these practices had never died out, so that he "had actually turned into a hobby, by constructing sophisticated tricks and sleight of hand, in the workshop of his house, "surrounded warm approval of the children"; and the second is when it becomes a physical characterization of Masters: tall and stout, expression inscrutable, wrapped in his dark overcoat and a bowler hat to his chest as if he beheld “the passage of a procession”. To emphasize the fact that at the beginning Carr (but not to inflate more his name, he adopted with all the Merrivale novels in the series, the pseudonym Carter Dickson) had not fully characterized the figure of Merrivale, you can see how the Old as it is also called, was presented as a man of law, but also a doctor, and especially in the early novels such as Head of the Military Intelligence Service (also known as MI6), although, when it is presented for the first time, is said to be was previously head of the Military Counterintelligence (also known as MI5). Being at the head of "Intelligence" Military, could explain the title of nobility that we often see prefixed to his name: Sir, though in his case the noble title is not acquired as a function of its operational excellence rather than by descent.
Conan Doyle's influence on Carr is detectable, in many cases: in the case of the duality Bencolin investigation, represented by Holmes and Watson, is masked and not clearly visible and if anything it is only understandable in the pair Bencolin and Jeff Marle, in two other major series, those of Dr. Fell and HM, the influence is much more visible, if not canonical. In fact, Dr. Fell is apparently opposite, but in reality it goes, the Inspector Hadley, and if HM in a sense embodies Holmes, Dr. Watson is represented by the unfortunate (which makes tenderness in some way) Master Chief Inspector. That seems to me to identify one of the most characteristic and brilliant of Carr’s writing: the characterization of the characters. Since it is an indisputable fact, that the pair of investigators, but in general the pair of players, attract most of the individual (Stan Laurel & Oliver Hardy, Fred Astaire & Ginger Rogers; Starsky & Hutch, etc..), Carr invented the characters , we can say that he has often used them.  Although it’s undeniable that the shoulder reinforcements support and finish to put under the spotlight the protagonist, the deus ex machina of the novel, it is also undeniably true that the “shoulder”, when it is broken so as to soften, become very sympathetic to readers, because in some way all of them tend to identify with him. Indeed, in this case, Masters becomes, with his bad luck to run into impossible crimes and locked rooms, a character almost more fun than the same HM looks. The fact is that both appear in The Plague Court Murders and their combination will feature the best of Carter Dickson’s production. 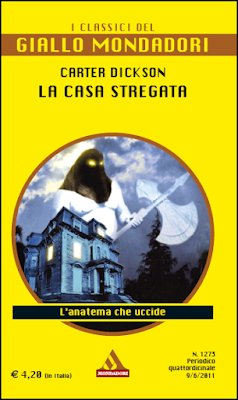 The first of the novels in the series, sees the entrance of HM not at the beginning but when the crime has already consumed: in fact the entrance of HM follows the lines of an entry into the scene with great fanfare of the protagonist, such as during a theater play, after a sort of introduction, here represented by everything that happens before HM appears on the scene to solve the riddle. And H.M. appears for the first time just because Major Featherton think about it, by contacting Ken Blake (who is the narrator), to put the investigation in the hands of that who is, a true expert, in the hands of Henry Merrivale. And by doing so Carr speaks for the first time about Merrivale, and does so, looking at Fell: garrulous, always lazy, lawyer and physician, vain, fat jokes and talk about pressures.
The investigation concerns a supernatural story from surveys, that of a dwelling, a bit far-fetched in London in the '30s (but often Carr knows how to make plausible situations that at the hands of others would laugh chickens), which says hotels a ghost, that of Louis Playge Executioner: it’s Plague Court, originally the seat of a tribunal. This home is owned by Dean Halliday and his family. Halliday has called on stage Ken Blake, his old friend, to preside at a seance, which will evoke the restless spirit of the Executioner, because you find peace, to manage the session will be a student of the occult sciences, Professor Roger Darworth, and Joseph Dennis the medium. In fact, the spirit is one of those wicked and devilishly clever, and could take over the body of a certain person to make him do what he wants: Plague in fact life was not only the executioner for activities, but also to the vocation took pleasure in hurting . So he had become the terror of those who were near; until the plague pecked too him, like all his countrymen. His brother, drove him from home, and the executioner, before dying, threw a curse on that house.
On the site of the seance there is also the Chief Inspector Humphrey Masters, whose presence is explained by the unusual fact that Darworth suspected of being a fraud, a fake scholar of the occult. The night of the séance, Darworth closes himself in Plague Court, while the séance proceeds, and there he is killed.
The fact is that crime is a classic Locked Room: in fact the door is closed and locked from the inside and the windows also, to complicate the story is the fact that Darworth was stabbed with the dagger that had been used originally by Executioner, and around the little stone house is an expanse of mud, where there aren’t footprints: it would therefore appear that the supernatural is the only possible track. In fact there would be a centenary tree, with its branches reaches the roof of the house, but its wood is so addled, that would not hold the weight of any person who climbed up there, as evidenced by good police Sergeant Bert McDonnell.
The protagonists of this drama, that is, Lady Benning, Marion Latimer, his brother Ted Latimer, and Major Featherton, astonished and frightened to attend events, the more that comes a cat found with his throat cut and a large stone vase is launched overhand: these facts show that all the spirits in place does not grant to any discounts of any kind. At this point, and here ends the introduction to drama, enters H.M. It is a dramatic entrance. H.M. is presented as a bald, fat, smoking bad cigars (which Carr model runs is Winston Churchill), who prefers to wear hats of any kind, that is not taller than five feet seven, and always wears white socks, and who knows an industrial quantity of dirty jokes. From this point, Merrivale will remain  until the end. But not before he had probed the past Darworth, because that's where you hide the origin of the drama, and that a second crime, even more terrible than the first, upset everyone will be killed Joseph, medium, Darworth mate. Not just killed, but also full of petrol and thrown into the boiler of a house. The explanation of Merrivale, a real masterpiece, will leave everyone with his mouth open.
Actually, as any first novel, this one is structured almost like the first and only, or that the same Carr hadn’t clear ideas on the continuation of the series: in fact, not only the fact that, after almost 150 pages , Merrivale appears in the novel, is a test of a different construction gained during the course of the novel, but especially that mysterious expression which appears after Merrivale’s apparition and about it you can not find any next justification. Why Carr feels the need to say that you are violating the rules of the detective story? And why right after he says that the person who premeditated the murder, she conceived just as a detective story?
In my opinion, is the affirmation of who (precisely Carr), not knowing yet whether the smile on the success or otherwise after the publication of this novel, claiming for himself the authorship of to have created a perfect novel, maybe the solution to most brilliant moment he had thought: who could premeditate a crime, conceiving it as if you were writing a detective novel, if not a writer of detective novels, and particularly one who wrote the novel in which we find these reflections? Only a writer who sets up the plot, and  invent an ingenious crime that works on paper and of which he, speaking by the mouth of Henry Merrivale, can reveal the explanation, could premeditate the crime, and he should conceive it in a frame mystery novel.
In short, John Dickson Carr could do it, only!
Because, despite the explanation leaves at open mouth, this is one of the many crimes whose explanation can be accepted only in the pages of the greatest inventor of locked rooms, in a literary context and invention, taken to the maximum expression.