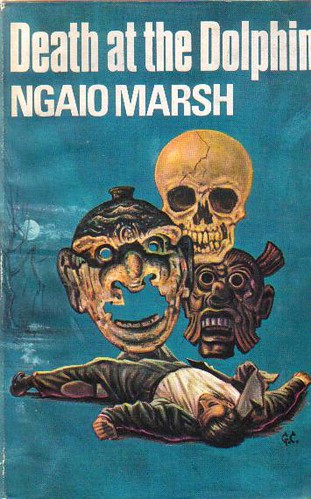 Ngaio Marsh, New Zealand, was a writer of great talent and great taste, very refined in her writing, which has favored the atmosphere in his novels, paintings and even more dramatic, reflecting the fact that she herself for most of his life is was a popular theater, having studied painting before, and that only over time that the advancing police wrote, nevertheless, from 1934 with A Man ​​Lay Dead to 1982 with Light Thickens, presented to the press 32 novels, some of which deal with issues related to the digital theatrical or artistic (painting). Among the first is included in the novel object, which is a theater and a performance of Shakespeare (not forgetting that many of the productions directed by Ngaio Marsh were dramas or comedies of Shakespeare), and by 1967 was a finalist dell'Edgar Allan Poe Award (Edgar Award that year was won by The King of the Rainy Country by Nicolas Feeling).
In Death at the Dolphin she talks about theater and Shakespeare, but the crime does not arrive soon, but after a 'elaborate introduction which, unlike other novels, is not so much to expose the reader to a situation of hatred or envy or jealousy can lead to a murder, because you have to create a condition for the crime.

Peregrine Jay, playwright and theater director, has a dream: to save from oblivion and destruction completes “The Delfin”, a theater that liberty is decaying, abandoned and ruined by time and neglect. One day he goes there, and after admiring the forms, the sculptures, the line of stalls and boxes, and having breathed the air, now dusty, a great theater of the time, filled by a crowd of fans at one time, whereas now it is from spiders and mice, wanting to try the stage, where they were exhibited important actors, not aware of a big hole, caused by a bomb dropped by a German plane, now filled with putrid water, and falls into it, no possibility of escape, with the real prospect of drowning, and no one can know that he is there desperately trying not to die in that water cold and smelly. Just when his hopes were dashed and that's where you're almost numb to surrender their will to the embrace of death, a hand grabs him and takes him to safety: it is the hand of Vassily Conducis, a fabulous greek billionaire, owner of the theater , who feels guilty for what happened to Jay. The fact is that, taken home and there Conducis after having bathed and changed.
and refreshed, he shows him something extremely rare: a glove that is believed to have belonged to the dead son of William Shakespeare, which has come into possession, and tells the history tied to it. Jay, made quite tipsy by the punch that son were given to keep warm after the chill of the adventure drama begins to fantasize, and during an impassioned tirade, infects Conducis with his dreams, to revive the Delfin tying him to a play based right on the history of that glove. The fact is that Conducis, when he is back on the ground of reality, offers a rare and unique opportunity: to finance the reconstruction of the theater's expense, provided that you represent Jay, with a suitable company, an event linked to the glove Shakespeare. And in return, the publicity that will be created in order to revive the theater, will also serve to enhance the taste of the sale to foreign collectors glove: The glove after appropriate expertise, aiming to confirm the authenticity of at least the time of creation, will be stored in a safe connected to security systems, inside the theater.
Meanwhile, Jay has set up the show based on a text that he himself has invented, but the actors who form the company will do anything to complicate his task: the whims of the leading actress
of Gertrude Bracey annoyed and want to repeat parts up to perfection by Marcus Knight, continuous banter between Hartly Grove, and patriotic vindication of the heirloom of the glove to England by the designer and friend of Peregrine, Jeremy Jones, the rehearsal to be go on set. But soon, especially Marcus and Hartly arrive at loggerheads over each other's addresses: one night someone steals the glove and at the same time kills the guard and tries to kill the younger actor's company, who normally plays the young son of Shakespeare, the which is given to the glove and then dies: the beauty is that in reality the guy is likely to departing hurriedly, falling (or stumbled accidentally launched after a struggle with the murderess) by a balustrade. The strange thing is that the guard was wearing a coat in brown boxes that had given their Hartly: Then doubt creeps in that someone has killed the guardian having mistaken for Hartly Grove.

At this point enters Sir Roderick Alleyn, Steward of Scotland Yard, which will investigate in an environment where the players often continue to act even in the reality of everyday life, explore even the smallest details, and to get to the end ' identification of the murderer, who will once again less likely to be one of the players, or designer? Or maybe it will be the same or Conducis Constantia Guzman American collector in disguise?
After a hunt mice, with numerous plot twists, the identification of the culprit will come under a tidbit, that escapes the attention but that has a fundamental value for the final solution, although the motive will be revealed at the end and will also be a surprise.
What you notice immediately, reading the novel, the atmosphere is that play is not fake, was not invented by those unfamiliar with that world, but has been built based on many personal experiences: the reproaches, the disagreements, rivalries, envy, jealousy between actors are rendered with great skill, from those who probably lived them every day. Moreover, the attachment to that world has become so intense: you feel the love for the theater, along with a pleasure that can be understood by those who live a passion for something, when Peregrine is in the theater in ruins and imagine how that theater would have to be seen through the eyes of the mind the antlers, the stage, the gallery, corridors, paintings, wooden sculptures, marbles, it's as if they were seeing at that moment Ngaio, because the theater director Jay Peregrine is Ngaio Marsh theater director. Only Ngaio is also a writer, and so were well assured that Peregrine will not be the murderer, and that in the end, next to Roderick Alleyn, the character will be more vivid and more sympathetic, among all those submitted.
That 's what makes the novel a very satisfying read and not at all boring.
Furthermore writer Ngaio Marsh confirmed racial and refined taste in the construction of the plot, indeed rather complex: it is not easy to identify the thread of Ariadne in this labyrinth of hatred and lies. As he rattles off the investigation, there will be revelations which may have their own importance as well as they can not have it, or may even confuse the issue, or they can order them. Just frame the decisive indicator, among many provided, and you will have the solution: just will not be at all easy to overcome Ngaio Marsh as sharpness!
Say no more because this is a novel to read and enjoy. And keep in mind that it is a novel of 1966, that is when the Marsh was old 71 years. But the surprise is that everything is so fresh and immediate, even if veiled by a melancholy yearning.
A rediscovery.