Fredric Brown : Night of the Jabberwock, 1951 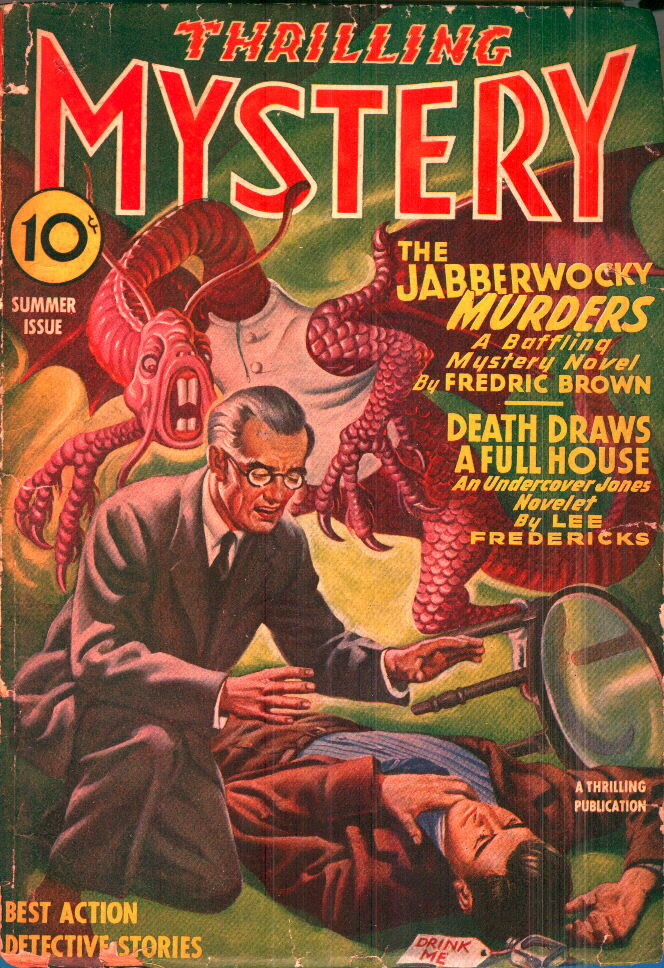 Fredric Brown is famous for original and bizarre plots and unusual ends in his novels.
Now, it is clear that his plots are not conventional , even very original , reading his works : I would say that it was a normal thing too , since the author was a famous science fiction author , and therefore the fantastic futuristic was for him a way of looking at everyday things in a different light. However, beyond that he was or was not , essentially an author of science fiction borrowed to crime fiction or an author of crime fiction borrowed to the sci-fi or both together, Brown was always trying. Sometimes the surprise is related to the use of instruments or strange events that follow the science fiction (i.e. The case of a strange customer , the novel that we reviewed recently ), sometimes in very strange situations .
Night of the Jabberwock , is a novel of 1951.
It 's the story of a small publisher , who resides in a small town in Illinois , Carmel City, where nothing ever happens . This forces him to rage over what could have been if he had lived elsewhere, and unfortunately procure the strangest news in the ranks of those cheesy , that can happen in a country where nothing ever happens. So, just to say something, even he managed to stand against the local police, whose the sheriff did not forgive the attacks against him. In fact, Doc Stoeger would like a nice crime, not for the purposes for which Gervase Fen by Crispin wanted it, i.e. an intellectual challenge , but to have material for a nice article . In fact, the thing he would like to do , would be a last great number, in which he could write everything he ever wanted, and then close the magazine at least in beauty.
But nothing ever happens at Carmel City .
Doc has two real friends : Carl Trenholm , a lawyer , and the bartender Smiley Wheeler, and with them he spends most of his time with the first reflecting, with the second drink (which is alcoholic). A third is his acquaintance Al Grainger, a young man whose the revenues nobody knows which they are, but that in himself leads a carefree life , and that engages Doc in endless games of chess.
One day, it happens all that did not happen in too many years: a series of facts so out of the ordinary ( always with reference to the routine of life of Carmel City ) that even only one would have been enough to cover the hole in the layout of the first page.
In essence, he assists in what would seem a bank robbery , but penetrated through a window ( it is a provincial bank , in 1951 , not a modern bank, where if you also have a key on you, the metal detector at the entrance does not let you pass! ) stretches the bumbling thief , only to realize he is the teenage son of an acquaintance of his , the banker and master of bank, Clyde Andrews ; learns that the husband of her maid , had an accident in the Department of Roman Candles , a fireworks factory , burning one hand;  he realizes that at his small town turn the bad guys , two gangsters , one of which is wanted , famous for their ferocity , who almost did not swell with fists, just because he would not say which city was the one in which they had arrived by car, gangsters whom he subsequently will find by Smiley : Smiley also recognized them , and they will be saved from certain death just because Smiley will take advantage of a moment uncertainty of the two gangsters, shooting them with the gun whom Doc has in his pocket; a lunatic escapes from the asylum , and the police organizes roadblocks to catch him ; Ralph Bonney , rich industrial fireworks factory owner , and Miles Harrison , deputy sheriff , who is escorting him because of the wages of workers, from one bank to another city , they vanish into thin air; and finally one last amazing event happens before the eyes of the unbeliever Doc: he be gone before our eyes, after a little time . But the thing that most he can not believe is that , about any of these extraordinary things, he can write a piece , because for one reason or another, the people involved therein accepts that he write a piece about the fact or about themselves .
However, are all things that Doc did not properly lived , except the adventure along with Smiley against the two gangsters.
What it happens to him now rather it’s incredible.
In an interval between one thing and another, not his friend Grainger who entertains him with challenges chess but a strange little man  who shows up on his doorstepwith, who qualifies himself as Yehudi Smith: he entertains him about his knowledge of Lewis Carroll and Alice in Wonderland: few people know that years before Doc wrote his own practice about this visionary and that is quite a scholar . Soon Doc focuses on the strange guy that is fascinating for him, as is evident , because of his knowledge of the work of Carroll, also of essays by Carroll, very little known about the math: so the two become comfortable and Doc  by Yehudi is invited to a meeting in an abandoned and haunted house, where there will be a true rite about the existence of the fantasy world of Alice, in another dimension.
They go together, enter into an attic , they find a little table with a small key and a small bottle with a label that says DRINK ME (as into Alice in Wonderland): Yehudi drinking from the bottle and he slumps ... poisoned and stiff . 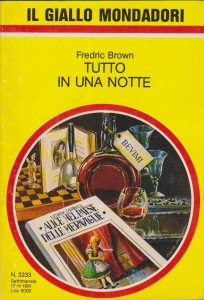 Doc runs away from home , he goes to the police station where he denounces all to the sheriff who does not believe him , but sends his second deputy to the house , where there is nothing; but from the trunk of Doc’s car blood is dripping: with the Doc Yale key that he found on the little table in the attic, they open the trunk of the car and they find the industrialist and the deputy sheriff vanished, dead.
Doc must have been ! It’s clear: he is mad! All because of all the liquor that he gobbles up !
The sheriff Kates who hates him , is about to kill him when Doc manages to escape and hide in the bar of Smiley: in the fumes of alcohol, he seesYehudi sitting at a table and talking to him and answering his questions. There is nothing supernatural : Doc putts into the mouth of his extension of his subconscious the answers he seeks, and finally he understands how the whole thing could have happened , who might have done to organize the conspiracy against him, and why he killed three people. And with the information had from Smiley , about the phobia of which would suffer the alleged murderer , the pirofobia (fear of fire) , he manages to force him to make a full confession .
It happens more in this novel and the ending is whimsical , though without upheavals of the last line .First, the novel , like many others in the production of Brown, is a hybrid: it melees environments and situations hardboiled , with a deductive enigma . We could say that it is very close to the atmosphere of Jonathan Latimer and Craig Rice : gangster and punches , alcohol and guns , but also fantastic Carroll atmospheres, a poisoning , a corpse that disappears , and two corpses that appear in the trunk of the car, a key that would open a small door and instead opens a trunk, and a bizarre plan to accuse an innocent and at the same time inherit a fortune.
In essence we are dealing with a Pout -pourri , a soup of hilarious and ironic situations, bizarre and rambling , but also dramatic and tense and especially a series of circumstances absolutely paradoxical : a paradoxical situation , a paradoxical subject , paradoxical ambiance , a paradoxical poisoning , disappearance and reappearance of a paradoxical , and above all, a paradoxical murderer and a paradoxical motive . Almost we could say that if  Brown didn’t write the novel and he did not pack in such a way, falsely arranged but stylistically very popular , we could attribute it to the deranged fantasies of an alcoholic writer .
The fact is that motive and murderer , sticking out like a cabbage to snack: why just that person should be the murderer and why Doc can figure out what could be the motive? If anything, he imagines what could be , but ... without a shred of proof .
It almost seems that the drinks, cocktails , calls into motion his nerve cells. Doc is an alcoholic and like all alcoholics need to drink to be able to get better:  in our case he uses the drink to be able to understand how it was hatched the plan , why and by whom. And the delirium tremens gives him the solution by splitting his identity in two : he and Yehudi . Yehudi , now dead, appears as an alter ego of Doc, his subconscious . This interview absurd , dreamlike and unreal between the conscious part of Doc ( Doc himself) and his subconscious ( Yehudi ) does not embody nothing more than the pursuit of truth in himself, the Socratic dialogue: if Socrates found the truth through the dialogue (Method of philosophical inquiry otherwise known as “Socratic method” ), Doc , through dialogue with a part of himself that asks questions, takes the connection . In other words , Γνῶθι σεαυτόν .
The nice thing is that all this is embodied in Doc , a man who needs to drink to think.
But the "drink" in addition to being the spring to learn , makes Doc arrives at the truth in a very strange way : i.e. assuming , without evidence , on the basis of a theorem absurd, so if everything that happened in that night is absurd , also the truth must be.
Did Brown mean that the truth not ever can be reached with absolutely rational methods and that sometimes even the chance and luck are important in human affairs ? Or they may find “the truth” without evidence , basing on absurd mental constructs ?
Here then is the final by Brown, for me is the real punch in the stomach : on what evidence or even better, on the basis of what evidence, does Doc nail his enemy, the murderess ? Nothing .
The revelation occurs through the torture:  by placing before the threat of being burned, the murderer reveals everything Doc has already thought It could not have happened that the murderer was not the real one and that he admitted to be him only because victim of psychological torture (for him also real ) ?
Why don’t we think that Doc to save himself, invented an ending of convenience, creating an ideal culprit , which in turn be able to absolve himself?
Why don’t we think the ending by Brown accounted in his case  a “Je t'accuse” about the torture?
Therefore, for me, because it is a fascinating tribute to Alice in Wonderland ( each chapter is introduced by a verse of Carroll's book ), and for his hiddeen meanings, this is one of the best works, perhaps, by Fredric Brown.