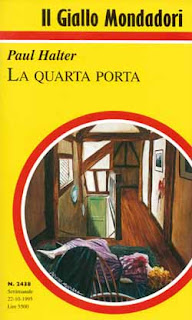 It was the year 1986, when the then-unknown author alsatian Paul Halter, in love with the classic Mystery and in particular with John Dickson Carr and Agatha Christie – but he had read many other authors – tried a career as a successful novelist, publishing his first novel. The careful reader of blogs and tireless including foreigners and sites that are all the rage, objected that mine is a fundamental error in the article: not 1986, but 1987. Already, because many sites also influential, have always emphasized as the first novel by Paul Halter, was La Quatriéme Porte, “The Fourth Door”. They highlighted how Halter, with his first novel, La Quatriéme Porte , already he won a first contest of the literature. This is the rumor, but it did not tell that no all the rumor responds to the truth. Or at least to the whole truth. Before stating of things, it should prove the correctness.
Oh yes, because instead, my dear readers, contrary to what is claimed by some sites also quite interesting, the first novel written by Paul Halter was not La Quatriéme Porte but La Malediction de Barberousse, a novel, written in 1985 and self-produced, with which Paul Halter participated to the “Prix de la Société des écrivains d'Alsace et de Lorraine” in 1986. And he won. From there, he began his career, which then had a surge when the year after he won with La  Quatrième Porte the “Prix du Festival de Cognac” and two years later with Le Brouillard Rouge the all-important “Grand Prix du Roman d'Aventures”. So, in 1988, could be said he came to success, which never left him”.
(Paul Halter - La Malediction de Barberousse :
http://deathcanread.blogspot.it/2012/03/normal-0-14-false-false-false.html )
I knew that, for many years: for the first time Igor Longo spoke about, just a decade ago. He was the first pushing me to read the Halter’s works. Igor is a friend of Halter, and he is the historic translator in Italy (18 translated works including the novel that would be released in Italy the next month) and for this, we have treated many times the subjects of the works translated into Italian and the subjects of those that would be translated.


It 's true, however, that several may be incurred in the error of the bottom, to trust what Halter squirts at the beginning of the novel: Alan Twist is presented in La Quatriéme Porte as an ex-inspector, while in La Malediction de Barberousse, Twist is presented instead as a criminologist. Ultimately then, if we trust the roles created by the alsatian writer, La Quatriéme Porte should be the first and not the second novel.
But I am close to fifty years and therefore the memory is not what it was once [ J ] I wanted confirm it.
Now, if John Pugmire didn’t confirm what I knew ( La Malediction de Barberousse … No sooner had I said that than Paul authorized Le Masque to publish it, based, he said, on the fact that I liked it. It came out in 1995) and Paul Halter then, asked about, ten days ago, he didn’t tell what I wanted to know, that is the reason why the first novel written had been published only in 1995 (“…Concernant votre première question, je vous confirme que La Malédiction de Barberousse est mon premier roman, qui a obtenu un prix régional en 1986, mais n’a pas été publié à ce moment-là. Il a fallu attendre que je sois assez connu pour qu’il soit enfin publié au Masque (1995). En fait La Quatrième porte est mon premier livre publié.”  ), I might think, in the time-reversal of the publication, to another quote, this time about Ellery Queen.

In fact, in 1930, the two cousins ​​Dannay and Mannay, published their first work, The Roman Hat Mystery, where Ellery Queen was presented as a type pedantic, with an encyclopedic knowledge, married, father of a child, and who was resident, along with his wife and son, in a villa in Italy. The fact is that in later novels, the figure of Ellery Queen was reformulated and rethought, and even her fifth novel, The Greek Coffin Mystery (1932), introduced the reader to the revelation that this was the first great adventure of Ellery Queen. In other words, Ellery Queen promised to be his fifth novel published (the fourth in the series focused on the adventures of the eponymous detective) dated back to a time preceding that of his first appearance editorial, The Roman Hat Mystery.

Paul Halter proceeds in a manner similar to Ellery Queen, diverging but at some point: in fact, he writes before La malediction de Barberousse, with which he participates in 1986 to a competition that we could say "regional", but the novel is not published officially , and in fact in his bibliographic list, it is ascribed to 1995 as a publication. Instead, the first novel to be published, not to be written - this is the basic error – is La Quatriéme Porte, in which Alan Twist makes his debut as an ex-inspector. However, if The Roman Hat Mystery is the first novel to be written and published, but in reality into fictitious history of the adventures of Ellery Queen, becomes second to fifth novel to be published, La Quatriéme Porte despite being the first novel to be published and in which Twist is presented as ex-inspector, it was actually the second to be written.
Despite the binding words of the same Paul Halter, I still wanted to summarize my hypothesis, because it seems to me a curious similarity with other circumstance.


This reversal of citations and references, more passes the time, more I realize be it one of the constants in the halterian literary production.
The fact is that, mainly, Halter in turn has always professed admirer of Carr, Christie (and also Rawson). And so it happens (and it happened in the past) that several times he has cited his favorite authors. I think so. In the past I have voiced this position several times to Igor Longo, I have treated for many years, and that is his Italian translator, and his friend more than a simple decantation of expedients invented by others, seemed to me to always the custom of a perfect tribute to his myths. For this, read a novel by Paul Halter, if it is a pleasure for the enthusiast, becomes a pleasure for the critic who can recognize the many influences masked. In other words, the mere reading of a novel, becomes, in the case of Halter, a meta-reading.
(  http://deathcanread.blogspot.it/2012/03/normal-0-14-false-false-false.html  )
However, as I have stated in other situations, Halter creates references that can be willed or unconscious, given the large number and the large variety of novels, about which he formed himself.
Now, let’s examine the novel, ad substantiam, as they said our distant ancestors.
What is La Quatriéme Porte in the Halter’s literary production ? Surely it is one of his best works, and we can go to call it a true masterpiece. 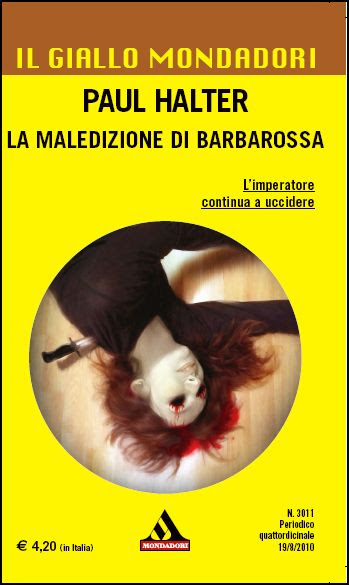 Why? The answer is simple and complex at the same time: if you read La malédiction de Barberousse, you understand how to work in a certain way is still immature, although already quite daring: the fact is that it is too much daring, according to this way of proceeding typical of those who do not know whether they will continue to write novels, and that, in order to impress, creates a jaw-dropping plot as much as possible, causing the amazement of the reader, but in the end, however, unable to provide an explanation to the bottom of responding to the questions proposed, and at the same time, in his tribute to the great writers who preceded him, failing to embed quotes and literary references in this wonderful way, then that is one of his fundamental literary characteristics. These quotes, however, appear to be too many and sometimes even redundant: for example, to create the legend of Barberousse, Halter uses a series of circumstances, many derived from the work of other writers:  for example the soldier killed in the street, is clearly derived from Chesterton, as well as the german killed on the roof of bridge cites "The second problem of the covered bridge" by E.D.Hoch; he quotes Carr about the place of the murder, a tower (He Who Whispers or The Case of the Constant Suicides) and draws from that, varying to the contrary from The House in Goblin Wood  the theme of the corpse brought at the house rather than the opposite; from Agatha Christie’s The Murder of Roger Ackroyd, and Evil under the Sun (the victim that gets along with murderer wanting to play a joke to others, not knowing that the victim will be her), he draws inspiration for the solution, also.

La Quatriéme Porte, however, is a novel with a plot perfectly thought out, and whose quotes are perfectly embedded in the plot, and even recognizable at the eye of the learned and attentive reader (not all. they are ), they are always perfectly included: after all, if you do not know that the twelfth novel to be published (the ninth in the series of Twist) is not such but that it was the first to be written, we would not understand the strangeness of the immaturity of the plot, especially as the novels that surround it, Le Cercle Invisible (the Invisible Circle) 1996, Le Diable de Dartmoor (the Demon of Dartmoor) 1993, and  A 139 Pas de la Mort (A 139 steps from the death) 1994, are excellent novels, very beautifully built and whose explanations are perfectly matched to the construction of the puzzles.

End of Part One