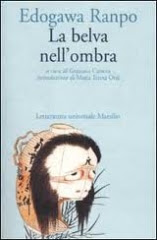 Edogawa Ranpo is a name unknown to most. Died in 1965, was considered at the time, "by the two cousins ​​Queen", one of the greatest authors in the world of crime, especially short stories. Edogawa Ranpo has also become a legend for his novels: one of his masterpieces is Inju.
Edogawa Ranpo is a genius. He processes the European tradition of detective novels  inserting in it a typical Japanese frame and adapting it to the society of his country. He inherits especially Edgar Allan Poe: in fact, born as Hirai Taro, he changes at some point his name in Edogawa Ranpo (Name + Surname, read in Japanese,  are very close in pronunciation to Edgar Allan Poe). But then he reevaluates the whole European tradition, from Conan Doyle to Agatha Christie, creating works in which the abyss of destruction is total, and in which there are psychological disorders together to horrendous crimes, and all in a crescendo of anguish, all personnel.
Inju talks about a writer of detective novels, who because of his susceptibility to analysis and deduction, is dragged into a vortex from which he will not lift up (maybe).
It all begins when Samukawa, writer of detective novels, in a museum in which there are various statues of Buddha, sees a beautiful woman, stopping at the window he is looking. Soon they begin to talk about this and that. He learns that she call Oyamada Shizuko, and that is the wife of Rokuro Oyamada, a businessman, administrator of the Rokuroku company, much older than her. He watches her that moves gracefully in her kimono, and in his heart begins to try something for her, and decides to find out why on her back there are signs of whippings, of which one can see the extreme layers at the nape and neck. In the days that followed, he learns that her friend is haunted by his old love, another writer of detective stories, who Samukawa knows hearsay: Shundei Oe. This man did not forgive Shizuko for  abandoning him, and although she had managed to disappear without a trace, however,he  managed to find her and he wrote to her the letters in which he announced the intention of killing her husband Oyamada Rokuro and then herself. Samukawa feels compelled to do something for her sudden and he begins to investigate as a detective. He begins to attend, to go her home. At the same time he decided to investigate about Shundei: decides to use Honda, the editor of a magazine that published works Shundei and asks about notices and if the letters that Shizuko caused him to read could have been penned in fact by Shundei, since Honda knows how he writes: Honda responds that the writing is by him and undeniably also how he uses verbal expressions and adjectives, it is belonging to him.
Honda says he has seen Shundei: is a fat man who one day he saw wearing clown suit into a park, while distributing Shundei’s advertising materials. In reality what is known about him is little: we know that is fat and who lives isolated, hermetically sealed in a house, and for a time was married.
One day, while Samukawa is at Shizuko home, she suddenly beckons him to shut up, and then they receive a strange ticking,  a clock you can not find: the ticking, they find, comes from the ceiling of the house, where you see a crack. Shizuko tells it to him and then she talks him that a few days before she saw the fierce eyes staring at her: it’s possible that Shundei was able to introduce him into the ceiling of the house without did she and her husband discovered him?
The fact is that it explains why in the letters that continue to arrive to Shizuko, Shundei can knowing many aspects of her inner life: perhaps he also saw the sadomasochistic rituals of Shizuko with her husband, who, in moments of passion, he lashes back with a whip he bought abroad.
Samukawa decides to penetrate into the ceiling and he understands well how Shundei could have done without the knowledge of the two spouses. He scours the ceiling of the house, finding it unusually clean .. and then he finds a button. Since that button is there? The women who clean the ceiling say that when they cleaned the last time, that button was not there. The button will be the clue that will lead Samukawa to an amazing series of observations, deductions and counterclaims to the end of the novel.
Shizuko tells him a few days after she saw Shundei watching her through the window, as "a beast in the shadows." This perception is a prologue to the crime of Oyamada. A day he after his arrival at home, after having stayed with his wife, he decides to visit a friend of his. He, left the house, will not return home: he will be found the next day under a barge sailing in the river in a horrible way: a woman who went into the toilet, a squat toilet, he sees a face appearing from the water through the hole of the toilet. The body will be removed from under the boat: he is Oyamada, naked or nearly so, with a deep wound that pierced the lung and caused his death and with a weird wig.
All are now looking Oe Shundei but don’t find him: he seems to be vanished, even from his home. The strange thing is that at the moment in which Oyamada dies also Shundei’s letters cease.
“Oyamada was killed by Shundei? And why at his death do anonymous letters cease? Could Shundei and Oyamada being the same person?”, asks the reader more and more passionate. Or could Oyamada for some perverse desired to have played Shundei to terrorize his wife? Or did Shundei and Shizuko together put on this story in order to kill Oyamada? Or else ..?
So many questions that Samukawa develops, and what he turns out, it makes him sure that it is the truth.
Extraordinary crime novel, all played on the psychology of the characters, know how to put on in place of the crime and come to his own achievements through the labyrinthine pathways of the brain, played on the alternation of right and wrong, of shadows that run, on truth who he does not know if they are these or they are only cleverly used lies. But it is also an erotic novel, morbid, with traits of perversion that make it unique, and very timely. But very, very refined.
Seems like a novel by some time ago. Then we read the date and we remain bewildered: 1928.
When Ellery Queen had not yet written his first masterpiece, Edogawa Ranpo already wrote something completely delusional, and .. mind you, very european. Because the solution (but is it the real solution?)  seems trivial, as it is brainly the best of premeditation.
The fact is that Samukawa, when he will destroy his previous resolution for another even more convoluted, drawn on the basis of the famous button, and even the wig, he will be not even sure to have guessed the right one, because he will always remain in doubt , the first solution was right.
A novel that can not miss in the library of a crime fiction lover.